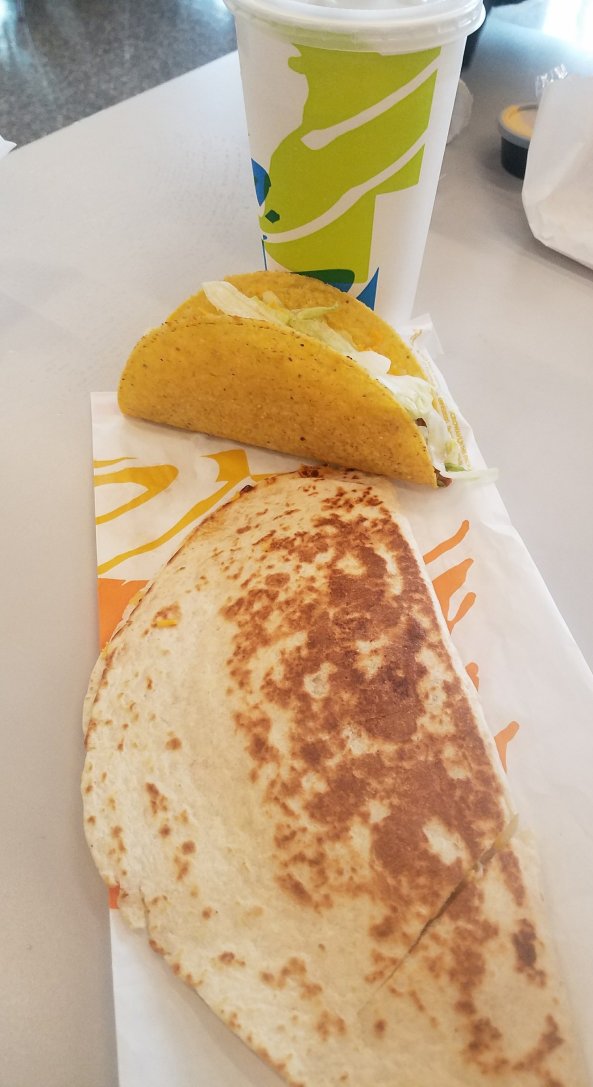 I finally did it. After 21 years. I ate a meal from Taco Bell. I know it may not seem like a big deal, but every time I tell someone I’ve never eaten at a Taco Bell, I get the same reaction: “OMG YOU NEVER HAD TACO BELL?! WHAT THE HECK?!”; To which I would reply almost apologetically, “Nope. It just hasn’t happened. Sorry?” But the days of that exchange are long gone because today, I got a “Number 7”. It’s a combo meal that consists of a chicken quesadilla, a hard shell taco, and a drink. Before I tell you more about my experience, let me share a bit of my Taco Bell knowledge with you.

According to Gustavo Arellano’s novel, Taco U.S.A, The restaurant chain would not be what it is today, without the help of a place called “Mitla Cafe”. Taco Bell’s founder, Glenn Bell, was on a quest to open a taco joint but he had one problem. He did not know how to make tacos! He then attempted to recreate Mitla Cafe’s infamous hard shell tacos, but was unsuccessful. Luckily, the owner agreed to show him how the tacos were made and Bell was able to sell his first taco by 1951. And in 1962, Bell opened the first ever Taco Bell. It became and remains a huge success throughout the U.S. That probably explains why everyone was so shocked I hadn’t tried it before today. Now on to the moment you’ve all been anxiously awaiting! Here are my thoughts on the restaurant chain.

Well, first I tried the quesadilla which is filled with chicken, cheese, and some sort of creamy sauce, all smushed together on a toasted tortilla. It was actually pretty good. Not mind blowing, but it got the job done! As for the hard shell taco, the flavor and presentation were reminiscent of the food served in school cafeterias. It had that strange almost plastic like, processed taste. I doused the taco in “Fire” sauce which I actually enjoyed quite a bit. The verdict? It was a pretty average meal. I wouldn’t run to Taco Bell but I’d maybe do a brisk walk, after a nightout! What do you think of Taco Bell?